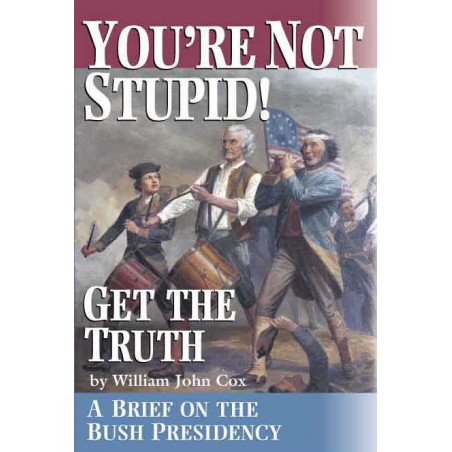 You Are Not Stupid : Get the Truth…

Information is power, and in this day and age, most Americans are powerless. That’s why this book is written for you, a busy person, to collect the key points scattered in a score of new political books in this election year.

Information is power, and in this day and age, most Americans are powerless. That’s why this book is written for you, a busy person, to collect the key points scattered in a score of new political books in this election year.

Many of us are sitting in the dark, staring at the wall, watching Fox News and MSNBC under the mistaken belief we are seeing the truth. But You’re Not Stupid: Get the Truth - A Brief on the Bush Presidency helps drag us into the sunlight by providing an examination of George W. Bush and his presidency.

At a time when most citizens don’t have the time to seek out discrepancies between the Bush rhetoric and the Bush reality, You're Not Stupid marshals information and provides an overview of Bush and his administration. In order for any voter to engage in intelligent debate over our government’s actions for the last three and a half years, he or she needs to know what those actions were. To this end, You're Not Stupid provides facts familiar to most as well as obscure information ignored or under reported by mainstream media. For example, how often has it been reported that Afghan President Hamid Karzai is a former employee of Unocal? That Saddam Hussein was installed by the CIA and maintained in power by President Bush Sr.? Who gave him permission to invade Kuwait to maintain oil prices? That the Bush administration’s candidate to head the new Iraq government, another CIA retainer, Ahmed Chalabi, is a convicted felon?

But just as important as providing the details, William John Cox presents the big picture. For instance, in order to fully grasp the catastrophe of 9/11, every American must consider the facts leading up to the attack and then evaluate the missteps that followed. To this end, the 9/11 overview provided in this brief is invaluable.

Cox has collected a large amount of information and condensed it into an accessible format. He approached this work as an attorney – gathering the facts and asking you, the reader, to reach a conclusion. Each chapter contains evidence that many would rather not acknowledge, but as an intelligent public, we must face, and question, the current state of our nation, while also supporting our troops and facing the realistic threat of terrorism in our own country.

The brief is, as the author says, "about you and me, the ordinary hard-working people in this country who need to look truth in the face, take a deep breath, draw a line, and take a stand for our families, our communities, and our nation."
If information is power, then You’re Not Stupid is a source of empowerment.

You are the jury. Read the brief and then decide.